Sean is
an absolute legend that made the move from Auckland down to Kāpiti to pursue his passion for young people in Aotearoa. We had a yarn to him about the new Kāpiti youth centre, Magic: The Gathering and what fuels him to work with Zeal. Read on below! Sean: When I was 16 in West Auckland I came to Zeal through Gateway for Event Management. I wanted to do something in art design and my teacher was like “well this Zeal place does events, maybe you could do posters for them.” I ended up only doing events and it sparked a passion within me. I ended up coming along to hardcore shows, which led to helping set up the shows, and then eventually running my own. I felt the love that Zeal has for our young people first hand, so I decided to move to Kāpiti and share that with the young people here.

Sean: Funny thing is, is that my days are never typical, they are also random and exciting! Most weeks I run a guys group called ‘Phat Chats with the Boi’z,’ which is a group created by young guys who wanted a safe place to hang out, have fun and share things that are happening in their worlds at the moment. Then on Wednesdays, I am helping support our new interns groups that have started that alternate each week, while having events on in the community during most weekends. It’s always something different, which is what I love about Zeal.

Sean: I love video gaming, watching anime, playing Magic: The Gathering and anything else geeky. I also like to go to the gym, chilling at the beach with some mates and I used to be in band back in Auckland so I wanna pick music back up again.

What’s coming up at Zeal Kāpiti over the next few months?

Sean: A lot of things! But mainly the thing I’m most excited for is the opening of our new centre! Super hella excited about it finally opening for young people to come hang out and tap into their creative passions.

What are some epic moments you’ve had during your time at Zeal?

Sean: Over the last 7 years? Waaaaaay too much! As a Zeal kid, my favourite epic moment was running my first ever show with a mate and we managed to get in like 100 people for some local bands, which I think for a couple of 16 year olds that’s pretty rad. I guess as an intern my most epic moment has been facilitating ‘Phat Chats’ and seeing the positive response it’s been having on a lot of young guys.

What’s some advice you would pass on to someone wanting to work with youth?

Sean: Know your why – why are you wanting to do youth work. Let it be your fuel to fight the unjust, let it be the bandage that heals your wound, let it be the passion that drives you and your young people.

What TV shows have you been watching lately?

Sean: I haven’t watched much in awhile but I guess the last TV show I’ve watched was Dragon Ball Super and maaaaaan it was good, can’t wait for the next movie to come out.

Sean: Most of my favourite NZ bands have disbanded (RIP As Colour Fades). But If I had to choose a current NZ Band it would be this band called Barracks, they’re pretty ok, you should give their EP a geez.

Phat Chats: young kiwis redefining what masculinity means
Zeal Kāpiti’s newest boys group, named “Phat Chats” by the young people, is redefining what it means to be a man in today’s society.
Kāpiti is getting a Zeal! Youth facility receives green light
Zeal has secured almost $1,000,000 of funding to open our newest facility in Kāpiti – continuing our mission of inspiring every young New Zealander through creativity. 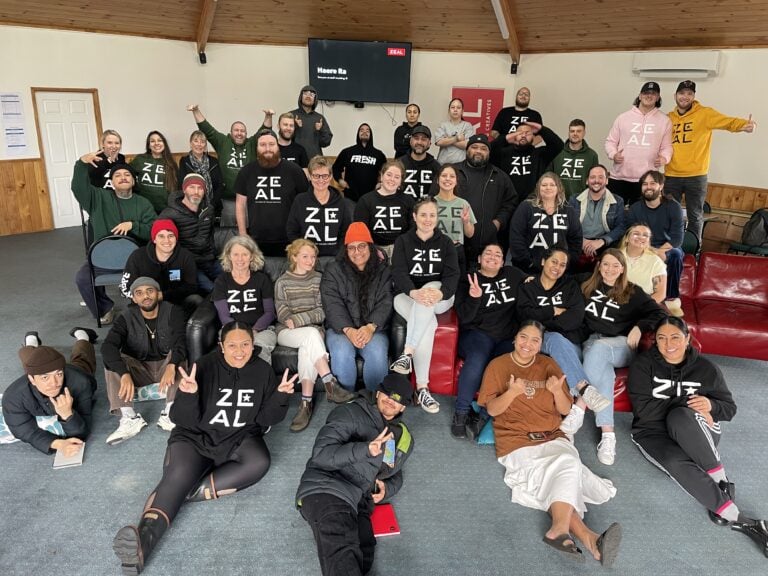